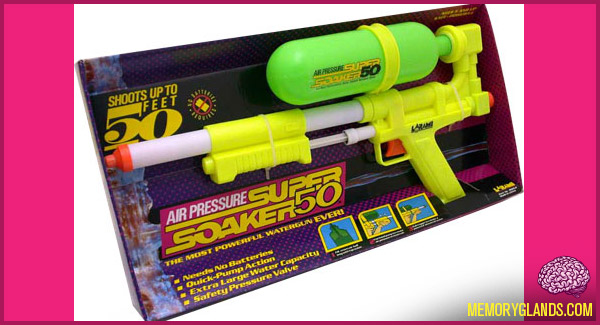 Super Soaker is a brand of recreational water gun, first sold in 1990, by Larami and now produced by Hasbro under the Nerf brand. Invented by Lonnie Johnson on November 13, 1989, the first Super Soaker, the Super Soaker 50, was originally called the Power Drencher. Rebranding the name to Super Soaker occurred in 1991 together with a series of TV advertisements.

The first Super Soaker blasters utilized manually pressurized air to shoot water with greater power, range, and accuracy than conventional squirt guns. Super Soakers were popular for many years – so popular, in fact, that the term super soaker is sometimes used generically, to refer to any type of toy pressurized water gun. The Super Soaker brand was further popularized in the 1990s by Michael Jackson, who cited it as one of his favorite toys.