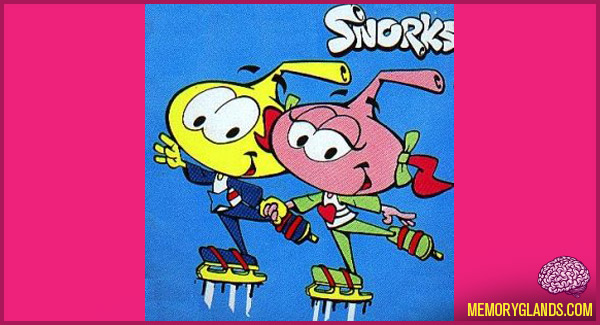 Snorks is an animated television series produced by Hanna-Barbera Productions which ran on NBC from September 15, 1984 to May 13, 1989. The program continued to be available in syndication from 1986 to 1989, on the BBC in the late 90’s, and from 2009–present on Boomerang. Freddy Monnickendam of Belgian character licensing firm SEPP originally developed the “Snorks” concept in 1982. Belgian comics artist Nicolas Broca created the original character designs, which were originally created for characters called “Diskies” he wished to include in the Spirou et Fantasio franco-belgian comic he was drawing at the time. A page and a few images were realized, and were published in the limited edition album Les Mémoires de Spirou in 1989. As of today, they have not been republished. The cartoon was relatively successful and has a considerable fan following.