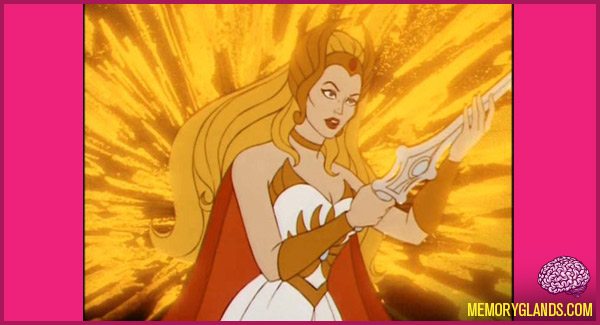 She-Ra – Princess of Power is an American animated television series produced in 1985 by Filmation. It is a spinoff of Filmation’s highly successful He-Man and the Masters of the Universe series, aimed primarily at a young girls’ audience to counter-balance the latter show’s popularity with boys. As was the case with its predecessor, the show was based on a toy line by Mattel (titled Princess of Power, itself a spin-off from Mattel’s Masters of the Universe line) and was produced with financial backing from Mattel to promote the toys. The show follows the adventures of She-Ra, He-Man’s twin sister, who is leading a group of freedom fighters known as the Great Rebellion in the hope of freeing their homeworld of Etheria from the tyrannical rule of Hordak and the Evil Horde. She-Ra makes her début in He-Man and She-Ra: The Secret of the Sword, a full length animated movie that was created by compiling together the first five episodes of the-then forthcoming syndicated series: “Into Etheria”, “Beast Island”, “She-Ra Unchained”, “Reunions” and “Battle For Bright Moon”. The series premiered in 1985 and was cancelled in 1986, after 2 seasons and 93 episodes.