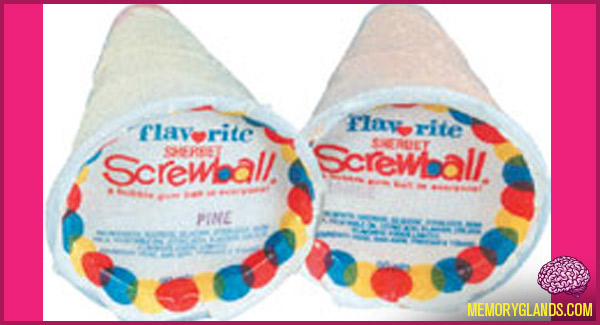 A screwball is a type of ice cream that first appeared in the 1970s. It consists of a cone of flavored ice cream inside a conical, plastic cup with a gumball at the bottom. The flavour of the ice cream is usually raspberry ripple, with a ball of bubblegum at the bottom. Several prominent brands produce screwballs, for example Asda, Popsicle, and Eskimo Pie. The name was originally a commercial product name but is now used to describe all such ice cream treats, whoever makes them.

‘Two Ball Screwball’ is a brand name (in the United States, a registered trademark) for a screwball containing two gumballs. The original flavor was cherry but it has also been introduced a multiple flavored twist of lemon and blue raspberry. As with all screwballs, the shape is that of an upside down cone with the gumballs at the bottom.