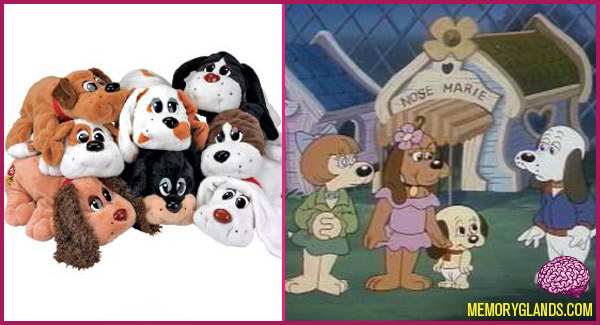 Pound Puppies is a toyline sold by Tonka in the 1980s. It later inspired an animated TV special, an animated TV series, and a feature film. Shipments of the toys over five years generated sales of $300 million in 35 countries.

The puppies have a variety of plush stuffed dog dolls with floppy ears and droopy eyes. They came in a variety of colors, some with spots. Each one comes in a carrying case with an adoption certificate. Smaller versions were also created (approximately 5 inches (13 cm) long), and a line of cats called Pound Pur-r-ries was also released. Each authentic puppy had a heart shaped emblem near its tail that sported a “PP” logo with either a dog (Puppies) or cat (Purries) peeking around it. In 1987, Hardee’s restaurants also offered a series of Pound Puppies with their Children’s Meals.