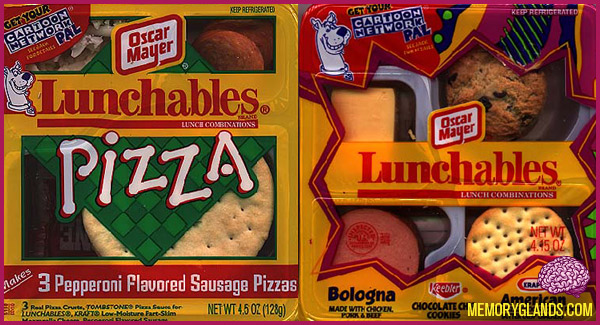 A typical Lunchables meal combination includes crackers, small slices of meat, and an equal number of slices of cheese. Other varieties include pizza, small hot dogs, small burgers, nachos, and wraps. Overall there are 25 different kinds of Lunchables meals. “Deluxe” versions, originally developed for adults, include two types of meats and two types of cheeses. Deluxe versions usually also contain a sauce and a mint. A larger version of Lunchables meal combinations called “Maxed Out” is also available.

Certain varieties contain Capri Sun drinks. Some are traditional flavors while others are the “Roarin’ Waters” variant.

Kraft began marketing Lunchables in the U.S. in 1988.

In 1997, Lunchables came under fire for having high saturated fat and sodium content while being marketed as a healthy children’s meal. For example, a single serving of Ham and Swiss Lunchables contained 1,780 milligrams of salt, which is 74 percent of the recommended daily allowance for an adult.