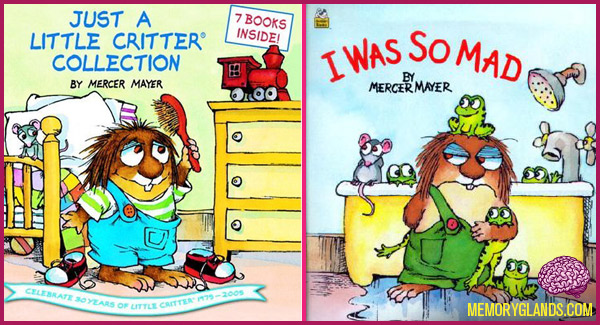 Little Critter is an anthropomorphic animal character created by Mercer Mayer. According to the official website, his animal species is just a Little Critter even though he, some friends, family and others like him looked like hamster-guinea pig hybrids. Originally, his home area was going to be populated by others of his species but the author put other known species of animals like skunks, rabbits, raccoons, tigers, etc. Little Critter first appeared in the 1975 book Just for You. This book is sometimes mis-titled Just for Yu because of the childlike mistake on the front cover. Since Just For You Little Critter has been featured in over 200 books. Mercer Mayer is still releasing books, CD-Roms (including the Living Books series), toys, and more featuring Little Critter.