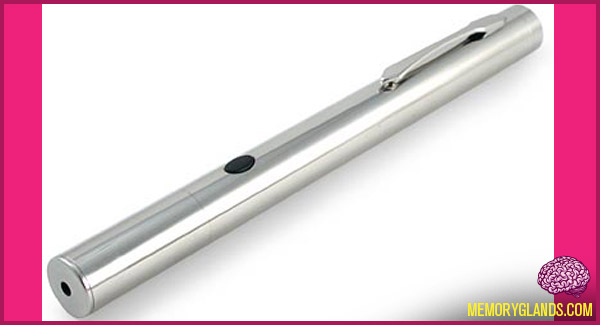 A laser pointer or laser pen is a small portable and visible laser designed to highlight something of interest by projecting a small bright spot of colored light onto it. Doctors say that laser pointers with power less than 5 milliwatts (5 mW) are generally safe to use, but devices with power of 100 mW or more sold on the Internet have recently caused permanent eye damage. The small width of the beam and low power of typical laser pointers make the beam itself invisible in a reasonably clean atmosphere, only showing a point of light when striking an opaque surface.

Some higher-powered laser pointers project a visible beam via scattering from dust particles or water/fog droplets along the beam path. Higher power and higher frequency lasers (green or blue color) may have a visible beam even in clean air because of Rayleigh scattering from air molecules, especially when viewed in moderately-to-dimly lit conditions. The intensity of such scattering increases when these beams are viewed from angles near the beam axis. Such pointers, particularly in the green-light output range, are used as astronomical-object pointers for teaching purposes, in the same general manner as flashlights.