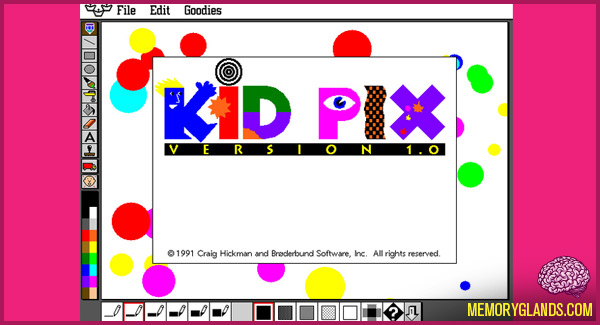 Kid Pix is a bitmap drawing program aimed at children. Originally created by Craig Hickman, it was first released for the Macintosh in 1989 and subsequently published in 1991 by Brøderbund. Hickman was inspired to create Kid Pix after watching his son Ben struggle with MacPaint, and thus the main idea behind its development was to create a drawing program that would be very simple to use. The product today retains much of the same principles as the original software created by Hickman in the late 1980s and early 1990s. The latest Mac and Windows versions of the product were developed by the owner and publisher of Kid Pix, Software MacKiev, who had been involved in development of Kid Pix versions since 1998 prior to acquiring the brand from Houghton Mifflin Harcourt in October 2011. Hickman had no involvement with the development of Kid Pix from the late 1990s until late 2011 when he began consulting with Software MacKiev on the development of future editions. Kid Pix and all of the intellectual property, trademarks and copyrights associated with it are owned by Software MacKiev.