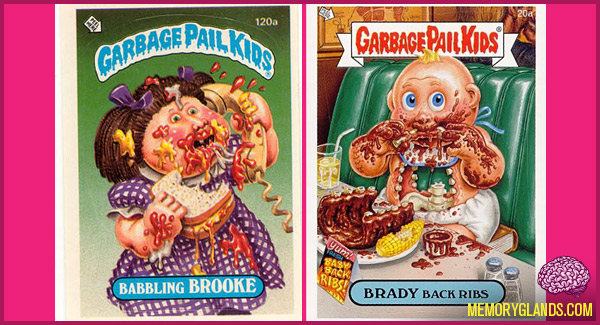 Garbage Pail Kids is a series of trading cards produced by the Topps Company, originally released in 1985 and designed to parody the Cabbage Patch Kids dolls created by Xavier Roberts, which were immensely popular at the time.

Each sticker card featured a Garbage Pail Kid character, with some comical abnormality and/or suffering some terrible fate, and a humorous, word play-rich character name, such as Glandular Angela. Two (and occasionally three) versions of each card were produced, with variations featuring the same artwork but different character names. Fifteen regular series were released in the United States, with various sets released in other countries. Two large format card editions were also released, as well as a set of posters.