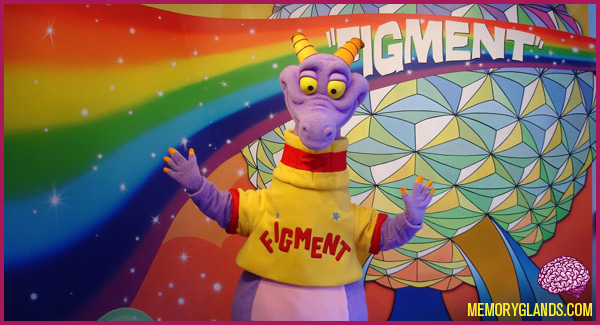 Figment, a small purple dragon, occasionally seen sporting a yellow sweater, is the mascot of the Imagination! pavilion at the Epcot theme park at Walt Disney World Resort. He is extensively seen in Epcot merchandise.

The Journey Into Imagination pavilion opened with the rest of EPCOT Center on October 1, 1982, but the Journey Into Imagination dark ride did not open until March 5, 1983. In the original attraction, Dreamfinder, a jolly wizard-like scientist, teaches Figment how to use his imagination. Figment is meant to be the literal embodiment of the phrase “figment of the imagination”. He is composed of various elements Dreamfinder found in his travels including two tiny wings, large yellow eyes, the horns of a steer (or dilemma, according to a 1983 appearance on the Today Show), a crocodile’s snout, and the childish delight found at a birthday party. Figment is described in detail in the Dreamfinder’s song “One Little Spark” (by the Sherman Brothers). Dreamfinder introduces him: “Two tiny wings, eyes big and yellow, horns of a steer, but a lovable fellow. From head to tail, he’s royal purple pigment, and there, voila, you’ve got a Figment.”