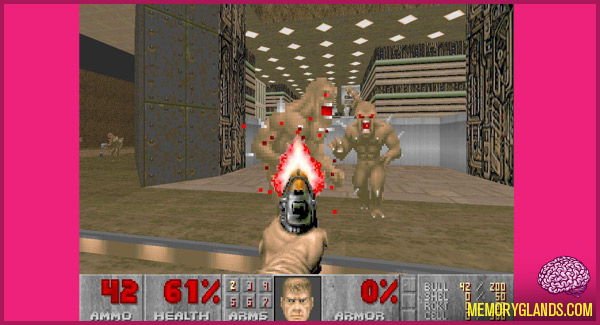 Doom (typeset as DOOM in official documents) is a landmark 1993 first-person shooter video game by id Software. It is widely recognized for having popularized the first person shooter genre, pioneering immersive 3D graphics, networked multiplayer gaming, and support for customized additions and modifications via packaged files in a data archive known as “WADs”. Its graphic and interactive violence, as well as its Satanic imagery, also made it the subject of considerable controversy. In Doom, players assume the role of a space marine who must fight his way through a military base on Mars’ moon, Phobos and he must kill the demons from Hell.

With a third of the game (9 levels) distributed as shareware, Doom was played by an estimated 10 million people within two years of its release, popularizing the mode of gameplay and spawning a gaming subculture; as a sign of its effect on the industry, games from the mid-1990s boom of first-person shooters are often known simply as “Doom clones”. According to GameSpy, Doom was voted by industry insiders to be the greatest game of all time in 2004. The game was made available on Steam on August 3, 2007.

The Doom franchise was continued with the follow-up Doom II: Hell on Earth (1994) and numerous expansion packs, including The Ultimate Doom (1995), Master Levels for Doom II (1995), and Final Doom (1996). Originally released for PC/DOS, these games have later been ported to many other platforms, including nine different game consoles, Rockbox firmware, and even PDAs and the Flash Player virtual machine. The series lost mainstream appeal as the technology of the Doom game engine was surpassed in the mid-1990s, although fans have continued making WADs, speedruns, and modifications to the source code released in 1997.

The franchise again received popular attention in 2004 with the release of Doom 3, a retelling of the original game using new technology, and an associated 2005 Doom motion picture. On May 7, 2008, following speculation by John Carmack at QuakeCon on August 3, 2007, Doom 4 was announced as in production. The game is neither a sequel to Doom 3 nor a new beginning of the franchise and it will use the company’s new id Tech 5 engine. On June 26, 2009, John Carmack released Doom Resurrection, a new game developed by Escalation Studios for iOS and published by id Software. The setting for Doom Resurrection takes place parallel to Doom 3, and it uses the characters and art from the previously developed game.