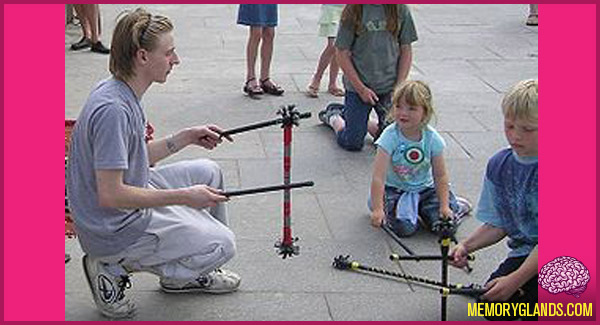 The manipulation of devil sticks is a form of gyroscopic juggling or equilibristics, and is generally considered to be one of the circus arts. Sometimes called devil-sticking, other terms for the activity include twirling, sticking, and stick juggling.

A “set” of devil sticks is made up of three pieces — the baton and two control sticks. Nonetheless, it is often called a “pair of sticks.” And the flower sticks are similar to juggling. They are basically juggling sticks. If the baton (center stick) is not tapered and has tassels (or other weights) at its end, it can be properly called a “flower stick” (as the tassels will twirl outwards and resemble an open flower when the stick is spun). This term can also refer to hybrid sticks which are both tapered and have weights. Tapered sticks without end weights are known simply as devil sticks. Flower sticks can also be properly called devil sticks, as that is the more general term.