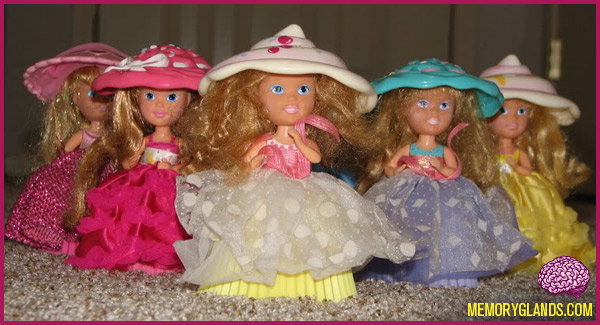 Cupcakes were produced by Tonka in 1990 then by Kenner from 1991-93 (Hasbro purchased Tonka in 1991, of which Kenner was a sub-division, and shifted production there). They were a series of dolls with plastic skirts which when turned inside out transformed into edible goodies with their hats becoming the icing. They were also scented, similar to Cherry Merry Muffin and Strawberry Shortcake dolls. They each came with a handbag shaped comb. There were seven different sets made, five of which turned into cupcakes, one set which turned into sundae glasses and another set which turned into jam jars. Along with the dolls there were several playsets and accessories produced too.