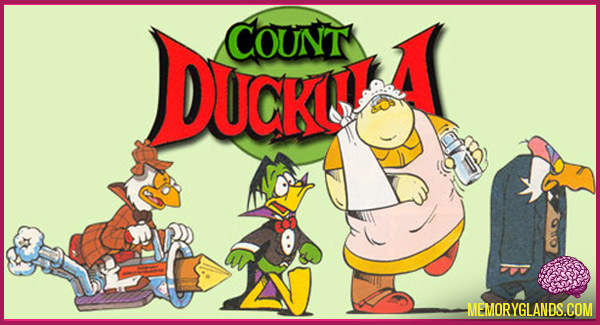 Count Duckula is a British animated television series created by British studio Cosgrove Hall, and a spin-off from DangerMouse, a show in which the Count Duckula character was a recurring villain. The series first aired on September 6, 1988 and was produced by Thames Television for 3 seasons and Central Television for the fourth and final series. In all, 65 episodes were made, each about 22 minutes long. All 65 episodes have been released to DVD in Region 2, while only the first series has been released in Region 1. Both the series as well as its characters continue to have a large following on the internet.

The show is a loose parody of the story of Count Dracula. Set in Transylvania, Duckula lives in a spooky castle known as Castle Duckula, alongside his butler Igor, and his large nanny (always referred to as “Nanny” and perpetually wearing an arm sling).