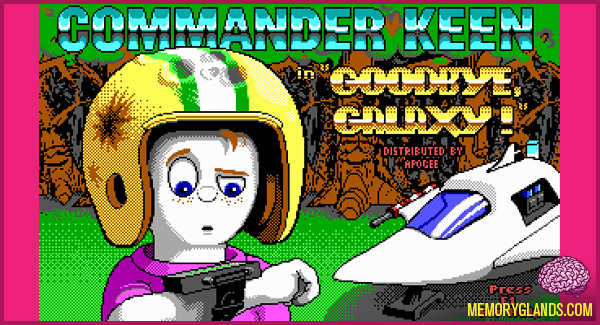 Commander Keen is a series of video games developed by id Software in the early 1990s. The series focuses on the adventures of Billy Blaze, an 8-year old boy who travels through space and assumes the identity “Commander Keen”. The series was successful at replicating the side-scrolling action of the Nintendo Entertainment System Super Mario Bros. games in DOS. The cartoon-style platform games are notable for their pioneering use of EGA graphics and shareware distribution, and they were some of the first games by id Software (which went on to develop blockbusters like Doom and Quake). The games were also exciting to the PC gaming community of the time because of John D. Carmack’s smooth-scrolling graphics engine. Although developed by id, most of the Commander Keen games were published by Apogee Software, an already established DOS shareware game publisher. Tom Hall is Commander Keen’s designer and the creator of its universe. The games (with the exception of “Aliens Ate My Babysitter”) were made available on Steam on August 3, 2007.