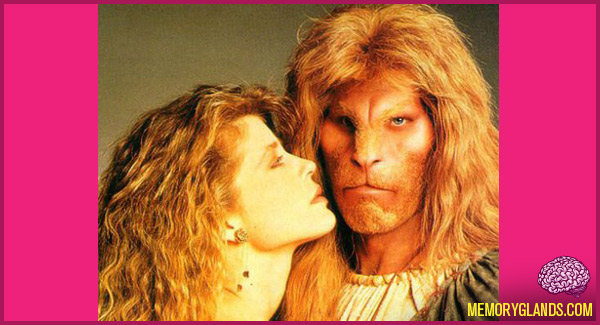 Beauty and the Beast is an American drama series which first aired on CBS in 1987. Creator Ron Koslow’s updated version of the fairy tale has a double focus: the relationship between Vincent (Ron Perlman), a mythic, noble man-beast, and Catherine (Linda Hamilton), a savvy Assistant District Attorney in New York; and a secret Utopian community of social outcasts living in a subterranean sanctuary. Through an empathetic bond, Vincent senses Catherine’s emotions, and becomes her guardian. The series follows the developing relationship between the characters and the division between New York and the hidden world beneath it. In a twist from the original tale, however, this “beast” does not transform into society’s idea of beauty after gaining the love of Catherine. Rather, Vincent’s inner beauty is allowed to remain the focus of who he is, and it is Catherine’s life that transforms from her relationship to Vincent. Vincent’s makeup was devised by veteran Hollywood makeup artist Rick Baker.

As the title indicates, the premise of the series is inspired by the fairy tale “Beauty and the Beast”; in particular, there is some connection to the Jean Cocteau French film of 1946, La Belle et la Bête.