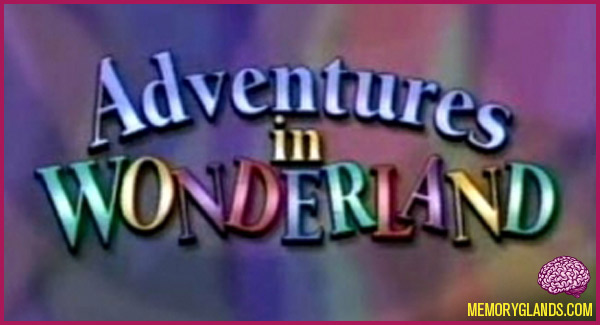 Adventures in Wonderland is a live-action musical television series based on Walt Disney’s animated classic Alice in Wonderland. In the series, Alice (played by Elisabeth Harnois), was portrayed as a girl who can go to and from Wonderland simply by walking through her mirror (a reference to Wonderland’s source material Lewis Carroll’s Through the Looking-Glass).

Usually the format consisted of Alice coming home from school and talking to Dinah (her cat) about a problem facing her that day, then going into Wonderland and finding the residents of that world facing a similar crisis. At the end of each episode she would return to the real world with a solution to her problem. In some cases, Alice would have a problem with her little brother, her older sister, a friend, or some other dilemma, and by the show’s end, she would know how to deal with it.

The show ran from 1991 to 1995 on the Disney Channel and on stations across the country. Like many Disney Channel original shows, Adventures in Wonderland was taped at Disney-MGM Studios at the Walt Disney World Resort in Lake Buena Vista, Florida, but on a single giant set for all scenes in “wonderland”, used exclusively for the show.
Walt Disney Studios Home Entertainment released three VHS tapes of certain episodes.