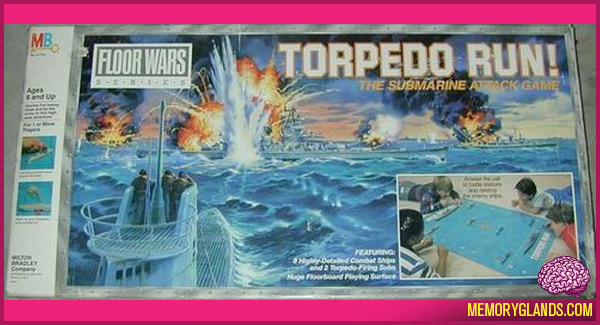 Released in 1986, this huge box (88 x 44 x 7 cm) was part of MB’s Floor Wars Series. Indeed, it is playable only on a floor –unless you have something large to put it on, like Ping-Pong tables.

This game is an introduction to naval miniatures of sorts; each player has four very large miniatures of WWII vintage ships (a battleship with its three escort ships) which manoeuvre about the large board. The players also have a “torpedo launcher” shaped like a submarine which fires discs that glide along the playing surface. The players aim at specific places along the ship waterlines. There, slots allow the discs to slide under the ship and trip a rubber-band mechanism which sends part of the ship’s superstructure (or gun turrets) flying, simulating damage.