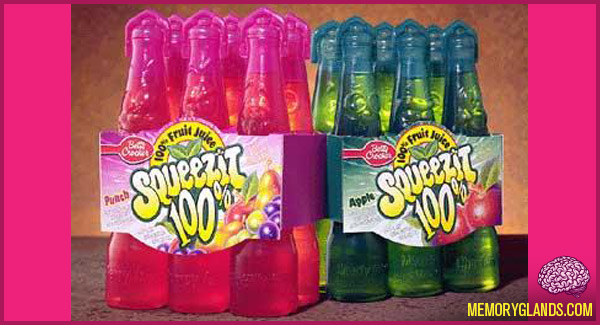 Squeezit was a fruit-flavored soft drink made by General Mills and marketed from the mid-1980s until the middle of 2001. The drink came in a plastic bottle that the drinker had to squeeze in order to extract the beverage from its container, hence the name.

Each flavor had a different character intricately designed into the plastic bottle. It came in multiple flavors and editions, one of which contained “color pellets” that the drinker dropped into the bottle to change the color of the Squeezit. The Flavors included Chucklin’ Cherry, Berry B. Wild, Grumpy Grape (later changed to Gallopin’ Grape), Silly Billy Strawberry, Rockin’ Red Puncher, Mean Green Puncher, Smarty Arty Orange, and Troppi Tropical Punch. For a limited time there were mystery flavors in Black Bottles where you had to guess the flavor. Presumably, the flavor was Kiwi Strawberry. Also, there was Life Savers Squeezit, featuring flavors such as Wild Watermelon, Blue Raspberry, and Tropical Fruit. Surprisingly, Squeezit fruit drink appeared on the 4th of July 2011.