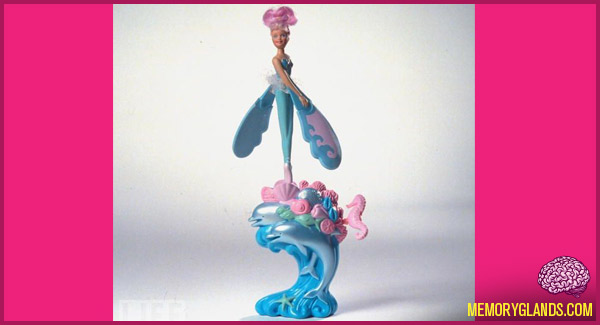 Sky Dancers is the name of a line of toys that were popular in the mid-1990s. The toys were constructed of a pull-string base and a doll with foam wings. When the doll was inserted into the base and the string pulled, the doll would launch into the air, spinning its wings like a propeller as it flew. Five characters were created: Jade, Camille, Breeze, Angelica, and Slam.

The toys were launched during the 1994 Christmas and holiday season and were an instant hit. While its foam wings provided a limited amount of safety, nonetheless, there were over 100 injuries reported. Galoob, the manufacturer of the toys, recalled them in June 2000 after less than six years on the market. The toys were re-released in 2005 with an adapted design, manufactured by Play Along Toys. Galoob released a similar toyline aimed at boys called Dragon Flyz.

The series spawned an animated television spinoff produced by Abrams Gentile Entertainment in association with Xilam in 1996. The five characters were said to be students at the High Hope Dance Academy under the widowed Queen Skyla. Queen Skyla and her students defended her kingdom from Skyla’s jealous brother-in-law Sky Clone, who sought revenge for his brother Skyler (Skyla’s husband) being selected as king over him. Sky Clone had successfully killed Skyler but was unable to gain control of the Sky Swirl Stone that gave the Sky Dancers their powers. The series ended after one season once E/I regulations took effect.