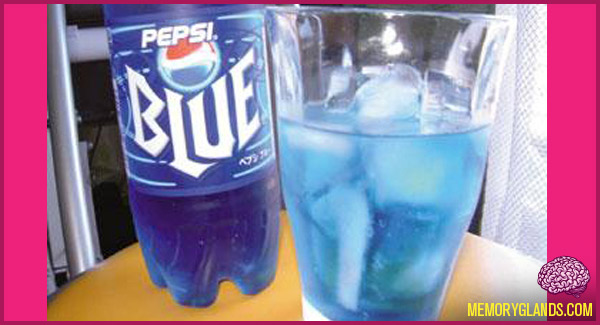 Pepsi Blue is a berry-flavored soft drink produced by PepsiCo. Blue was launched in mid-2002 and discontinued in Canada and the United States in 2004, although it remains available in some other countries. Its berry flavor was the result of taste-testing over 100 flavors over a 9-month period. Designed to compete with Coca-Cola’s Vanilla Coke, the flavor of Pepsi Blue was described by Pepsi only as “berry” and described by drinkers as like blueberries or raspberries, or similar to cotton candy with a berry-like aftertaste and much more sugary and syrupy than regular cola. It was tinted using Blue 1, a highly controversial coloring agent banned in numerous countries at the time. The move to make a brightly-colored version of the flagship Pepsi brand was spurred by 2001’s introduction of Mountain Dew Code Red, which had bumped PepsiCo’s Mountain Dew division sales up 6%.