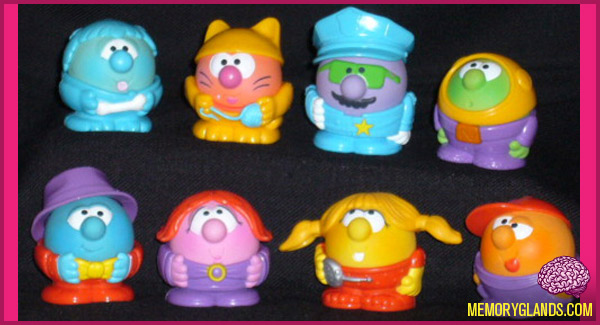 In the mid 1980s, Bonnie Zacherle submitted a series of patents which would later become known as the Nerfuls.
The tag line for this product line was “They’re a ball to be around!” Nerfuls were a line of toy figures produced by Parker Brothers in the 1980s. They were typically constructed of three or four pieces including a spherical vinyl head and a bowl-shaped body in which the head would sit.

According to their marketing, Nerfuls are a “group of bouncy, colorful little creatures who love fast action and great fun! They’ve traveled far from their tiny planet, Erf, just so they can roll around, bounce around, and always be around children. Make Nerfuls your friend and keep the good times rolling!” “When you take away the top and bottom of any Nerfuls 3-piece figure you’ll have a real ball. Each round little face is a ball for rolling, spinning, tossing and catching. But what makes Nerfuls even more fun to be around is the way you can take them apart and put them together in all sorts of silly ways!”