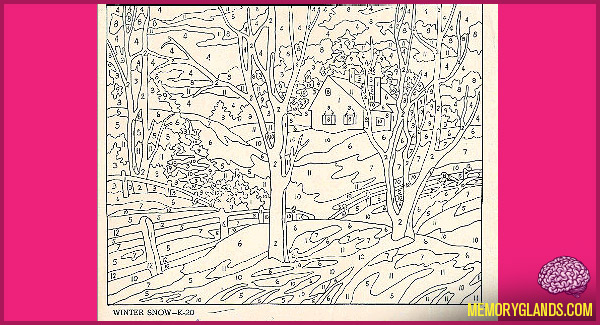 If you grew up during the 1950’s and 60’s, you should remember how satisfying it was to complete your first “paint by number” masterpiece. Even without any formal artistic training, anyone could be an artist.

The origin of this fad is attributed to Max S. Klein, owner of the Palmer Paint Company of Detroit, Michigan, and to artist Dan Robbins, who conceived the idea and created many of the early paintings. Paint-by-number kits first appeared in 1951 and by 1954, twelve million kits had been sold. Despite Robbins’ proposal that the first kit contain an abstract painting, most consumers preferred realist subject matters such as landscapes, seascapes, and animals and clowns. So confident was Palmer’s assurance to its customers’ ability to paint that each kit boldly declared, “Every man a Rembrandt!”