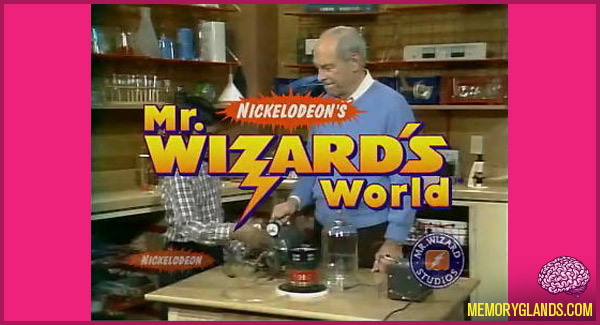 Mr. Wizard’s World, a faster-paced version of the show developed by Don Herbert, was shown three times a week on the then rising kids cable channel Nickelodeon. The show produced 78 episodes from 1983 onwards, and continued to run thereafter as reruns. During its airing on Nickelodeon, Mr. Wizard’s World was the channel’s #3 rated show in 1983 (behind Livewire, and You Can’t Do That on Television). The show was also famous for its Ask Mr. Wizard segment where Mr. Wizard answered questions sent in by Nickelodeon viewers of all ages. Episodes of Mr. Wizard’s World were re-aired in 2005-2006 on the digital cable channel The Science Channel. Mr. Wizard’s World still frequently airs on The Science Channel, and is considered a candidate for Nickelodeon’s “Nick Rewind” DVD/VHS release. Don Herbert once said: “My time on this Earth is getting shorter and shorter each day, but no matter how old I get, and even when I am dead, Mr. Wizard’s World will never die”. This series was canceled in 1990, though reruns continued on Nick at Nite until 1995 and often in early morning time slots right after Nick at Nite finished, through at least 1997.