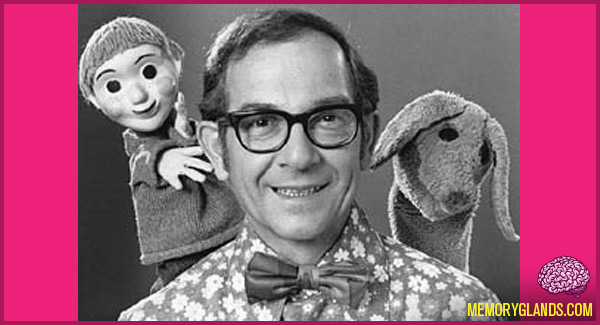 Mr. Dressup is a Canadian children’s television series produced by CBC Television that ran from 1967 to 1996.

The series starred Ernie Coombs as Mr. Dressup, a character who had started on the earlier series Butternut Square. The show aired every weekday morning, and each day Mr. Dressup would lead children through a series of songs, stories, arts, crafts and imagination games, with the help of his friends Casey and Finnegan, a child and a dog who lived in a treehouse in the back yard. Judith Lawrence was the puppeteer who brought Casey and Finnegan, along with other occasional puppet visitors like Alligator Al and Aunt Bird, to life. The set for the show included the inside of Mr. Dressup’s house, with scenes shot in the living room, kitchen, and a kind of play room that included the Tickle Trunk (where costumes used in make-believe skits were stored) and a long counter where Casey and Finnegan often appeared. Sometimes, the action moved outside to Casey and Finnegan’s treehouse.