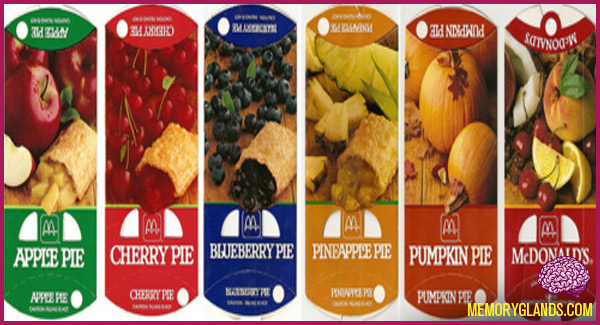 McDonald’s pies are actually turnovers and come in apple or, in some markets, cherry and other seasonal or limited-time-only flavors such as pumpkin pie and Holiday pie, and in Hawaii, taro, haupia and banana. In Canada, in the 1970s, blueberry was standard, as was the Great Fruit Pie. During some seasonal promotions, cherry and strawberry are an available pie flavor in Canada; also, newly featured is Blueberry Maple and Peach. Currently McDonald’s is selling raspberry pies, for a limited time. In Thailand and Guam, taro pie is featured occasionally. Other regional flavors include coconut and tuna (all in Guam as limited-time), and corn in Japan. In Mexico and Guatemala, cheese pie is available all year round. In Cyprus, strawberry and custard pies are available all year round also, along with the apple one. In Brazil, banana pies are available.