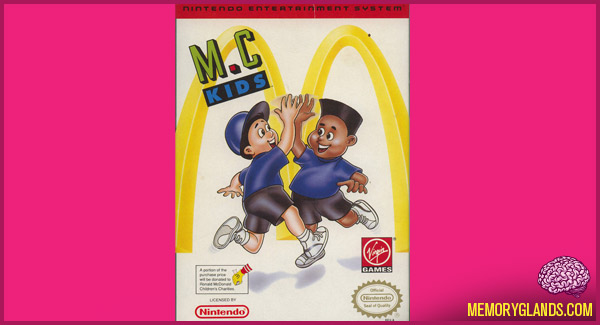 M.C. Kids is a 1992 platform game developed and published by Virgin Interactive. It was initially released for the Nintendo Entertainment System in February 1992 in North America and by Ocean Software in May 1993 in Europe. The game is loosely based on the McDonald’s fast food franchise and features two teenagers that venture into the McDonald’s fantasy world “McDonaldland” in order to return Ronald McDonald’s magical bag, which has been stolen by the Hamburglar.

The game was also released for the Game Boy (known in North America and Japan as Spot: The Cool Adventure, based on the Cool Spot franchise), Commodore 64, Amiga, Atari ST, and PCs (although all of the computer versions were only sold in Europe). Virgin Interactive would release another game based on the McDonald’s franchise for the Sega Mega Drive/Genesis called Mick & Mack: Global Gladiators that has more of a traditional side-scrolling action-adventure game. Both games were criticized for advertising the McDonald’s fast food restaurant chain (even though they contained almost no references to the company’s products) but regarded as cult classics ever since.