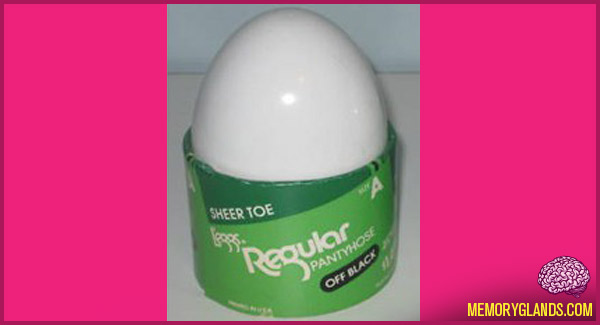 L’eggs is a popular brand of pantyhose introduced in 1969 by Hanes. The hosiery premiered a unique trade dress by placing its product in white plastic oversized chicken-egg-shaped containers and garnering shelf space in supermarkets and drugstores, most frequently on revolving carousel L’eggs displays (called the “L’eggs Boutique”), designed to draw customer attention to the product.

The L’eggs name, package and logo were created by designer Roger Ferriter, working in the design studio of Herb Lubalin Associates in New York City in 1969. On the morning of the scheduled presentation of the marketing and packaging ideas to the Hanes Corporation for the new low-cost pantyhose launch, Ferriter was not satisfied that the work was sufficiently creative. In an effort to revisit the name and packaging one last time, he attempted to “experience” the product in some new way, hoping that the exercise would suggest a new creative direction for the branding. Among his efforts, he attempted to compress a pair of pantyhose in his fist, wondering how compact the product could become. Staring at his clenched fist with the pantyhose inside he was struck with the possibility that the package could be an egg. Just as quickly, he realized that “egg” rhymes with “leg,” and then (adding the popular mid-century marketing boost of giving a product name some French-sounding twist), he incorporated the L’ (French for “the” when followed by a vowel such as the “e” of eggs) and arrived at L’eggs. Some sketches were prepared in time for the presentation, including a logo that incorporated two egg-influenced letter “g”s and thus was born one of the most successful product launches in history.