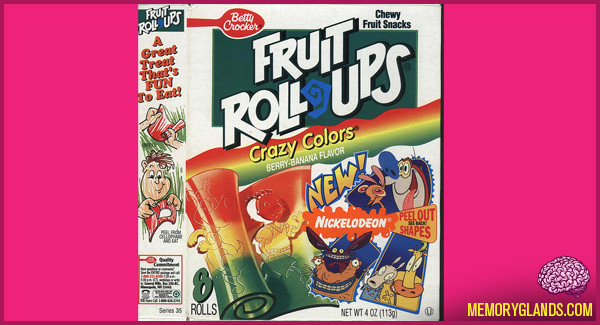 Fruit Roll-Ups is a brand of fruit snack that debuted in grocery stores across the United States in 1983. Research for the product began in 1975. Fruit Roll-Ups are manufactured by General Mills and distributed under the Betty Crocker brand in the United States. The snack is a flat, pectin-based fruit-flavored candy, wrapped around a piece of cellophane for easier removal. Often the consumer must unwrap the cellophane an extra revolution in order to remove the snack due to its tendency to stick to itself. Fruit Roll-Ups is similar to Fruit by the Foot (also a General Mills Snack) in that both snacks are packaged similarly (i.e., rolled around a material so the product does not stick to itself); however, the two snacks differ with respect to taste, texture, and consistency. In the United States, retail Fruit Roll-Ups are sold in boxes of 10.