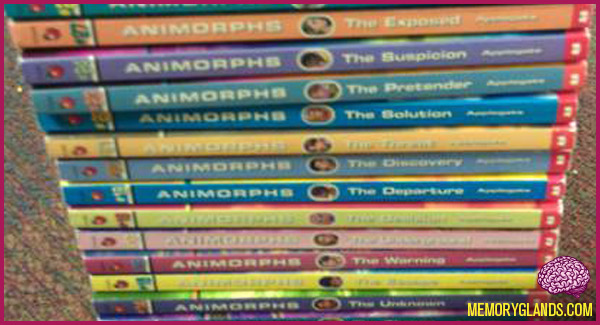 Animorphs is an English language science fiction series of young adult books written by K. A. Applegate and published by Scholastic. Five humans, Jake, Marco, Cassie, Rachel, and Tobias, and one alien, Aximili-Esgarrouth-Isthill (nicknamed Ax), obtain the ability to morph into any animal they touch. They name themselves “Animorphs”, a portmanteau of “animal morphers”. Using their ability, they battle a secret alien infiltration of Earth. It is told in first person, with the Animorphs taking turns narrating the books. Applegate cycles through the six protagonists, telling their story of the secret war through each of their perspectives. Horror, war, dehumanization, sanity, morality, innocence, leadership, and growing up are core motifs of the series.

Published between June 1996 and May 2001, the series consisted of 54 books and includes ten companion books, eight of which fit into the series’ continuity (the Animorphs Chronicles and Megamorphs books) and two that are gamebooks not fitting into the continuity (the Alternamorphs books). The characters grow up throughout the series, struggling to cope with the compromises and retreats they must make to win the war. The series allows the reader to observe the human condition as the characters are forced by their new, deadly circumstances to face the darkest, and also the brightest, parts of themselves. The series was originally conceived as a three-part series called The Changelings, in which Jake is named Matt, and his little brother Joseph takes the place of Cassie.