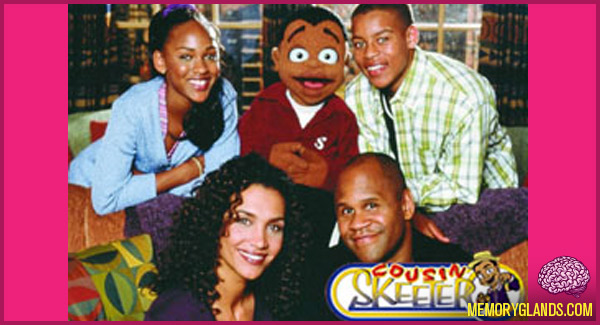 Cousin Skeeter is a television show which ran on Nickelodeon from 1998 to 2003. It starred Robert Ri’chard as Bobby, a young boy, whose life changed when his strange cousin Skeeter comes to live with his family. With Skeeter’s help, Bobby learns life lessons and tackles the general ups and downs of growing up. The show also included Meagan Good as Bobby’s friend Nina, Rondell Sheridan as Bobby’s father Andre, and Angela Means as Bobby’s mother Vanessa. Skeeter is portrayed by a live-hand puppet with Bill Bellamy providing his voice. Within the show, Skeeter is treated like a regular human and no mention of him being a puppet is made.