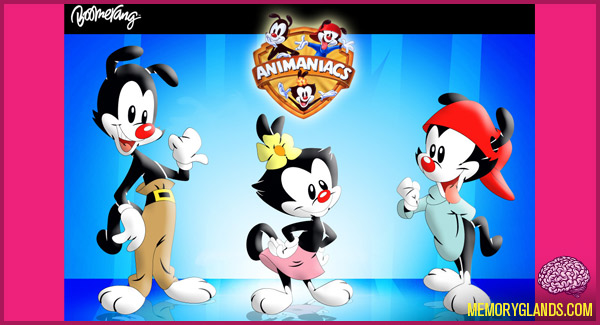 Steven Spielberg Presents Animaniacs, usually referred to as Animaniacs, is an American animated series, distributed by Warner Bros. Television and produced by Amblin Entertainment and Warner Bros. Animation. The cartoon was the second animated series produced by the collaboration of Steven Spielberg and Warner Bros. Animation during the animation renaissance of the late 1980s and early 1990s. The studio’s first series, Tiny Toon Adventures, was a success among younger viewers, and attracted a sizable number of adult viewers. The Animaniacs writers and animators, led by senior producer Tom Ruegger, used the experience gained from the previous series to create new animated characters that were cast in the mold of Chuck Jones and Tex Avery’s creations.

The comedy of Animaniacs was a broad mix of old-fashioned wit, slapstick, pop culture references, and cartoon violence and wackiness. The show featured a number of comedic educational segments that covered subjects such as history, mathematics, geography, astronomy, science, and social studies, often in musical form. Animaniacs itself was a variety show, with short skits featuring a large cast of characters. While the show had no set format, the majority of episodes were composed of three short mini-episodes, each starring a different set of characters, and bridging segments.

Animaniacs first aired on “Fox Kids” from 1993 to 1995 and new episodes later appeared on The WB from 1995 to 1998 as part of its “Kids’ WB” afternoon programming block. The series had a total of 99 episodes and one film, titled Wakko’s Wish. It later aired on Nickelodeon, Nicktoons Network, and Cartoon Network in syndication.