A to Z Mysteries 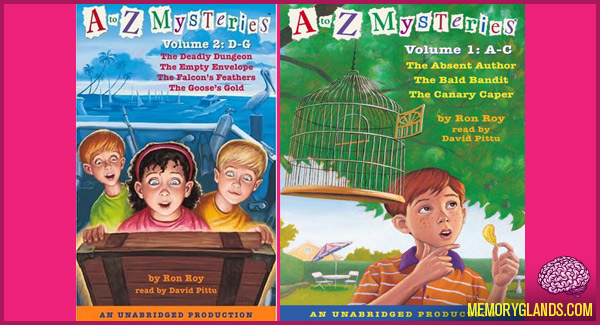 A to Z Mysteries is a popular children’s novel series written by Ron Roy and published by Random House. The series is generally considered among the best “easy readers” for young children. There are twenty-six books in the series, one for each letter of the alphabet. The series begins with The Absent Author, published in 1997, and ends with The Zombie Zone, published in 2005.

The books follow the adventures of three junior detectives, Donald David “Dink” Duncan, Joshua “Josh” Pinto, and Ruth Rose Hathaway. They are nine years old and live in Green Lawn, a fictional town in Connecticut, United States. Due to having the same author as the Capital Mysteries, the main characters’ paths cross with KC and Marshall (the other series’ main characters) and they become friends.

Other characters include Pal, a dog that once belonged to crooks and currently resides with Josh; a mystery writer named Wallis Wallace who first takes part in The Absent Author; and Mr. Linkletter, the local hotel receptionist. Others include Officer Fallon, Josh’s younger twin brothers Bradley and Brian, Ruth Rose’s younger brother Nate, and Mr. Pasky, owner of the local bookstore in Green Lawn.

Due to the popularity of the original series, a new series, A to Z Mysteries Special Edition with the same characters has started. The first book in this series, Detective Camp, was published in May 2006. In addition Ron Roy wrote a spin-off series titled Calendar Mysteries.

An article in Horn Book Magazine states that one reason for the series’ popularity may be that the main characters “are about as hip as oatmeal”, offering relief to readers who may feel burdened by peer pressure.