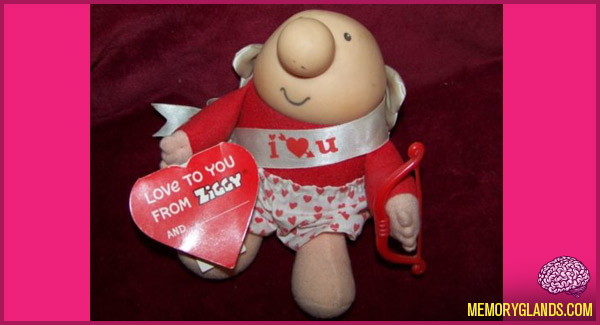 Ziggy is a cartoon created by Tom Wilson, a former American Greetings executive.

Ziggy is a small, bald, trouserless, barefoot, almost featureless character (save for his large nose) who seems to have no friends, hobbies, or romantic partner, just a menagerie of pets: Fuzz, a small white dog; Sid, a cat afraid of mice; Josh, a discouraging parrot; Goldie, a fish; and Wack, a duck. The appeal of the cast is juxtaposed with the endless stream of misfortunes which befall Ziggy. The character is frequently depicted in surreal or arbitrary situations, though many jokes mine typical comic strip pop culture territory, such as computers and the perils of modern life. Other pop cultural references can be found in the archives.

Ziggy first appeared in the 1968 book collection When You’re Not Around, published by American Greetings. The newspaper strip began in June 1971. In 1987 the strip was taken over by Tom Wilson II. The animated 1982 Christmas television special Ziggy’s Gift, which contained the Harry Nilsson song “Give, Love, Joy”, won an Emmy Award. There are annual calendars produced as well as various books and promotional items.

Tom Wilson has acknowledged that one in five Ziggy cartoons makes direct reference to the mathematical concept of the Axiom of choice. In his 2009 autobiography, Wilson stated that this recurrent theme is “my own unique way of expressing my love for mathematical analysis. Cartooning has been a career for me, but math was always my passion.”