The Monster At The End Of This Book 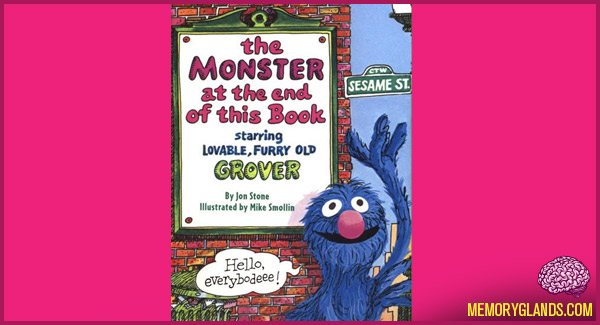 The Monster at the End of This Book was published in 1971 by Golden Press. It was written by Jon Stone and illustrated by Mike Smollin.

In this book, Grover is horrified to learn that there is a monster at the end of the book and begs the reader not to finish it, so as to avoid the monster. He uses several methods to try and keep the reader from progressing, including tying the pages shut and cementing them together with bricks. After each page is turned, the results of the failed effort is shown, and Grover tries a new method to keep the reader from turning yet another page. To the amusement and relief of Grover, the monster at the end of the book turns out to be none other than himself.

In its first year of publication, the book, which is one of the first to star Grover, sold two million copies. According to an internal Children’s Television Workshop newsletter, “this figure, according to publishing sources, is an all-time one-year sales record for a single book.”