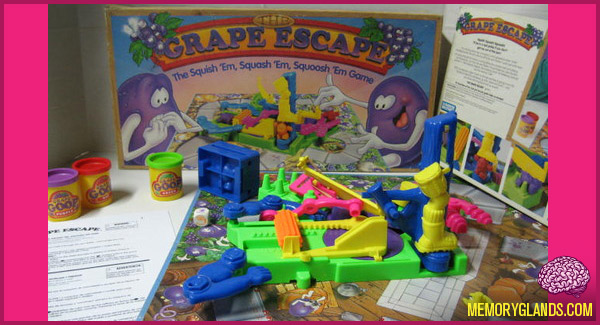 The Grape Escape was a board game released in 1992 by Parker Brothers (now Hasbro) and licensed by Rehtmeyer Inc.. The game was intended to entertain younger audiences of 5+ years old. The game was short-lived having only been available for one year.

The game consisted of playing pieces constructed of various colored Grape Goop (Play-Doh) that were fashioned after grape-like action figures. Game play consisted of maneuvering clay playing pieces through several plastic obstacles on a board that were aimed to physically disfigure or decapitate the playing piece; destroying the Grape Goop figure often resulted in losing the game, but sometimes had the affected player re-mold their Grape Goop figure using one of the included grape mold templates and returning to the start space. Some obstacles included: crank/rubber band operated scissors, steam roller, and grape stomping boot activated by lever and rubber band.