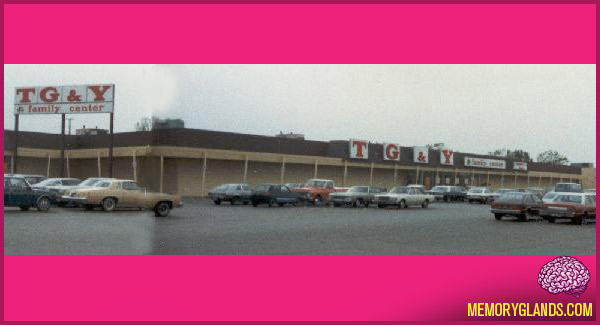 TG&Y was a five and dime, or variety store, chain in the United States. The chain was named for its three founders: Rawdon E. Tomlinson, Enoch L. “Les” Gosselin, and Raymond A. Young. The initials were ordered according to the age of the three, with Tomlinson being the oldest. Founded in 1935, the chain was headquartered in Oklahoma City. At its peak, there were more than 900 stores.

It was acquired by McCrory Stores in 1986, when it had about 720 stores. Shortly after McCrory’s purchased TG&Y, that company cut over 8,000 employees and closed 205 stores, including 23 in its former home-state of Oklahoma. It did business under the TG&Y Family Center and later TG&Y Dollar and Aim for the Best and Dollar-T names as well.

TG&Y stores were firmly embedded in southern culture as modern-day general stores with a bit of everything, and often called by the irreverent monikers, “Turtles, Girdles and YoYos”, “Toys, Goodies and Yummies” and “Toys, Gifts and YoYos”. Near the end of its successful years, the chain used the advertising slogan, “Your best buy is at TG&Y.”

In 2001, TG&Y filed bankruptcy and all stores were eventually closed.