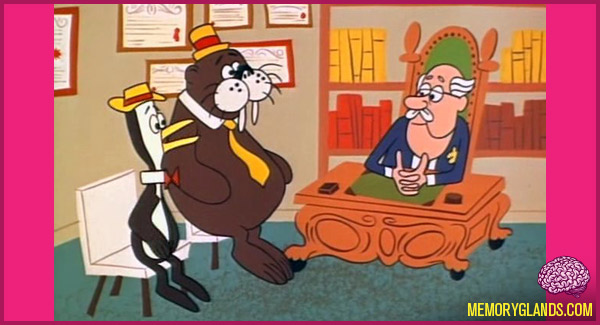 Tennessee Tuxedo and His Tales is a popular, semi-educational animated cartoon TV series that originally aired on CBS from 1963 to 1966. It was produced by Total Television, the same company that produced the earlier King Leonardo and the later Underdog, and primarily sponsored by General Mills. The title is a play on “tuxedo and tails” formal wear.

The cartoon series revolved around Tennessee Tuxedo the penguin (voiced by Don Adams), and his best friend Chumley the Walrus (voiced by Bradley Bolke). The pair lived (not always willingly) at the Megapolis Zoo, under the control of the ill-tempered zoo director Stanley Livingston (voiced by Mort Marshall), and his zookeeper assistant Flunky (voiced by Kenny Delmar).