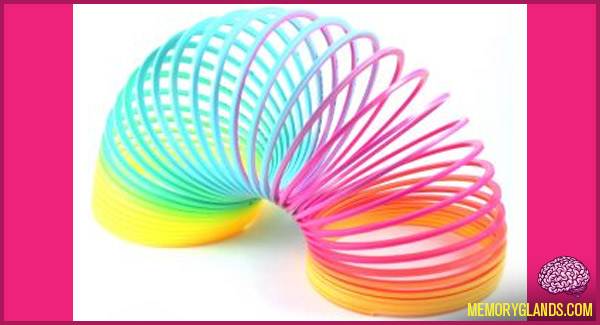 Slinky or “Lazy Spring” is a toy consisting of a helical spring that stretches and can bounce up and down. It can perform a number of tricks, including traveling down a flight of steps end-over-end as it stretches and re-forms itself with the aid of gravity and its own momentum.

The toy was invented and developed by naval engineer Richard James in the early 1940s and demonstrated at Gimbels department store in Philadelphia, Pennsylvania in November 1945. The toy was a hit, selling its entire inventory of 400 units in ninety minutes. James and his wife Betty formed James Industries in Philadelphia to manufacture Slinky and several related toys such as the Slinky Dog and Suzie, the Slinky Worm. In 1960, James’ wife Betty became president of James Industries, and, in 1964, moved the operation to Hollidaysburg, Pennsylvania. In 1998, Betty James sold the company to Poof Products, Inc.

Slinky was originally priced at $1, and has remained modestly priced throughout its history as a result of Betty James’ concern about the toy’s affordability for financially disadvantaged customers. Slinky has seen uses other than as a toy in the playroom: it has appeared in the classroom as a teaching tool, in wartime as a radio antenna, and in physics experiments with NASA. In 2002, Slinky became Pennsylvania’s official state toy, and, in 2003, was named to the Toy Industry Association’s “Century of Toys List”. In its first 60 years Slinky has sold 300 million units.