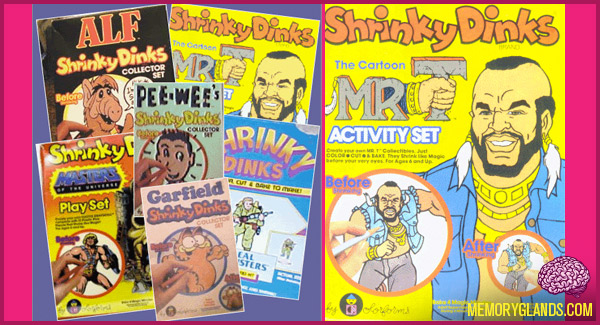 Shrinky Dinks are a children’s toy/activity kit consisting of large flexible sheets which, when heated in an oven, shrink to small hard plates without altering their color or shape. They reached the height of their popularity in the 1980s. Most sets are pre-printed with outline images of popular children’s characters or other subjects, which are then colored in before baking.

Shrinky Dinks were invented in 1973 by Betty Morris and Kathryn Bloomberg of Brookfield, Wisconsin, as a Cub Scout project with their sons. The first kits were sold at a local shopping mall and became very popular. Shrinky Dinks were soon licensed to be manufactured by the major toy companies of the time such as Milton Bradley,Colorforms, Western Publishing and Skyline Toys. The shrink plastic is still available from many retailers and can be used for anything from charms to pins.

Recently, University of California, Merced Professor Michelle Khine has applied Shrinky Dinks to create tiny structures for the application of microfluidics to topics such as stem cell research.