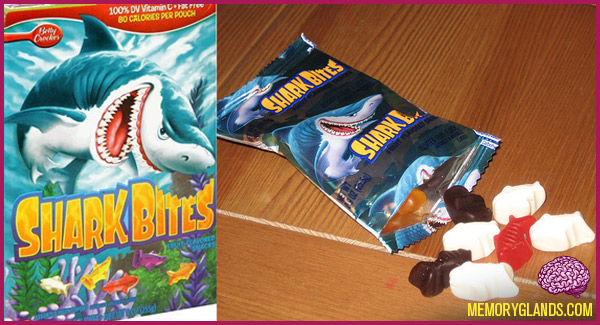 Shark Bites is a fruit snack product produced by Betty Crocker. The product consists of several individual gummy candies, all of which are in the shape of a shark. Each gummy shark is colored to replicate the appearance of its corresponding fruit flavor. The Sharks come in the colors Red, Orange, Yellow, Purple, and White. Each color represents a fruit flavor.

It is unknown whether the White Shark is supposed to taste like one of the other flavors each time, or if it is a flavor of its own. Popular belief leans towards the latter. Leading tasteologists at Vanderbilt University have recently debated the flavor of the white shark with much enthusiasm. Their experimentation has been inconclusive as of November, 2010. Also interesting, the yellow shark is not the expected lemon flavor; oddly enough the yellow shark is strawberry.

The White Shark is typically spotted only once in any given pouch. Individuals should consider themselves to be very lucky if they find multiple White Sharks when opening a pouch of Shark Bites. The rarest occurrence is a pouch of all opaque Sharks. These pouches can contain up to three White Sharks in addition to the opaque yellow and opaque purple Sharks.