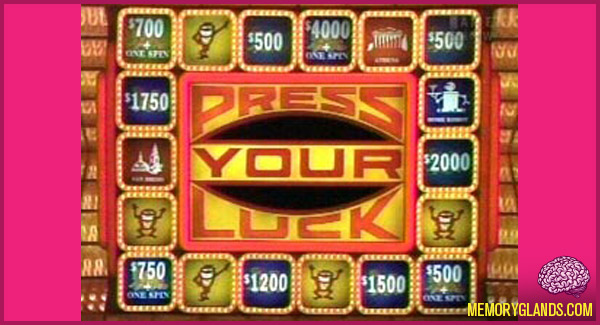 Press Your Luck is an American television daytime game show. It premiered on September 19, 1983 on CBS and ended on September 26, 1986. In the show, contestants collected “spins” by answering trivia questions and then used the spins on an 18-space game board to win cash and prizes. The person who amassed the most in cash and prizes at the end of the game won. Peter Tomarken was the show’s host and Rod Roddy was the primary announcer.

The show was known for the “Whammy,” a red cartoon creature wearing a cape. Landing on any of the Whammy’s spaces on the game board took away the contestant’s money, accompanied by an animation that would show the Whammy taking the loot—but frequently being chased away, blown up, or otherwise humiliated in the process.