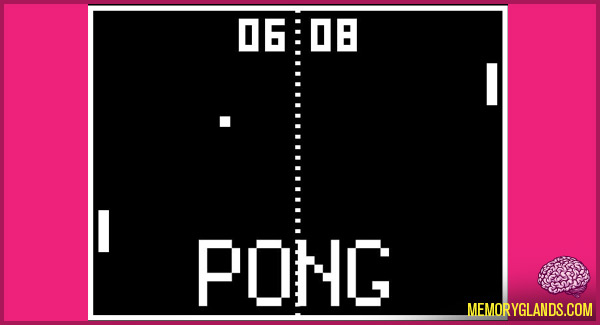 Pong (marketed as PONG) is one of the earliest arcade video games, and is a tennis sports game featuring simple two-dimensional graphics. While other arcade video games such as Computer Space came before it, Pong was one of the first video games to reach mainstream popularity. The aim is to defeat the opponent in a simulated table tennis game by earning a higher score. The game was originally manufactured by Atari Incorporated (Atari), who released it in 1972. Allan Alcorn createdPong as a training exercise assigned to him by Atari co-founder Nolan Bushnell. Bushnell based the idea on an electronic ping-pong game included in the Magnavox Odyssey, which later resulted in a lawsuit against Atari. Surprised by the quality of Alcorn’s work, Atari decided to manufacture the game.

Pong quickly became a success and is the first commercially successful video game, which led to the start of the video game industry. Soon after its release, several companies began producing games that copied Pong’s gameplay, and eventually released new types of games. As a result, Atari encouraged its staff to produce more innovative games. The company released several sequels that built upon the original’s gameplay by adding new features. During the 1975 Christmas season, Atari released a home version of Pong exclusively through Sears retail stores. It was also a commercial success and led to numerous copies. The game has been remade on numerous home and portable platforms following its release. Pong has been referenced and parodied in multiple television shows and video games, and has been a part of several video game and cultural exhibitions.