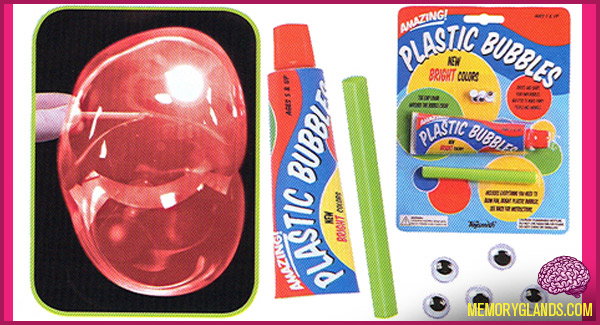 Super Elastic Bubble Plastic was the brand name for a children’s toy manufactured from the 1960s through the 80s by Wham-O. It consisted of a tube of viscous plastic substance and a thin straw used to blow semi-solid bubbles. A pea-sized amount of liquid plastic was squirted from the tube and made into a tiny ball. One end of the straw was then inserted into the ball, and the user would blow into the other end, inflating the plastic into a bubble. The bubble could then be removed from the straw by pinching the hole closed, sealing the air inside.
The size of each bubble depended on the amount of plastic used. Roughly the consistency of bubblegum, the bubbles formed were much more durable than simple soap bubbles, and could be gently manipulated to make different shapes, and stacked to make simple figures such as snowmen. Much less durable than actual balloons, however, they could pop easily if overinflated or handled with too much force.

Besides the obvious potential for messes when letting children play with liquid plastic, the substance also emitted noxious fumes. The fumes could become concentrated inside the straw, so users had to be careful never to inhale through the straw while inflating their balloons. Because of these problems, Super Elastic Bubble Plastic was eventually discontinued, but other similar brands remain available.