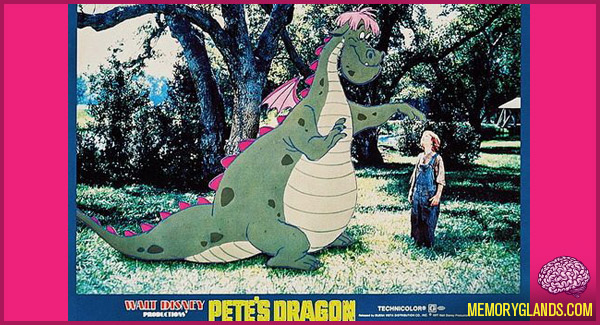 Pete’s Dragon is a 1977 live-action/animated musical film from Walt Disney Productions and the first Disney film to be recorded in the Dolby Stereo sound system. It is a live-action film but its title character, a dragon named Elliott, is animated. The story is about a young orphan named Pete who enters the town of Passamaquoddy a small fishing community in Northeastern Maine. His only friend is a dragon named Elliott, who also acts as his protector and can make himself invisible and is generally visible only to Pete, which occasionally lands Pete in trouble with the locals. Also starring Helen Reddy, Mickey Rooney, Jim Dale, Red Buttons, Jeff Conaway, and Shelley Winters. The film was directed by Don Chaffey, and the songs are by Al Kasha and Joel Hirschhorn.

The song “Candle on the Water” received an Academy Award nomination, but lost to “You Light Up My Life” from the film of the same title. Reddy’s recording (with a different arrangement than the one her character sings in the film) was released as a single by Capitol Records, reaching #27 on the Adult Contemporary charts. The movie also received a nomination for Original Song Score and Its Adaptation or Adaptation Score, losing to A Little Night Music.