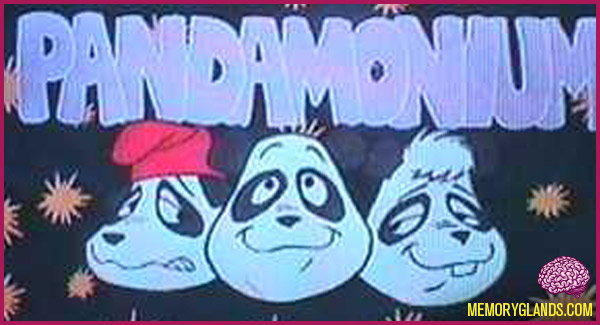 Pandamonium was a 1982-83 animated series that aired on CBS.

“When an evil alien named Mondraggor attempted to steal an ancient object called the Pyramid of Power, the pyramid shattered into many pieces, which scattered around the world. Each week, Mondraggor would race against two human siblings, Peter and Peggy Darrow, who were accompanied by three talking pandas named Chesty, Timothy, and Algernon, who were irradiated by the Pyramid’s magic. The three of them could unite to form Poppapanda, a being with supernatural power.

In the air, Mondraggor possessed control over wind, fire, thunder and lightning. On Earth, however, all of his powers disappeared except for his ability to control people’s minds, leading him to brainwash several people in his attempt to claim the pyramid pieces.

The series was cancelled after one season, before all of the pieces of the Pyramid of Power were successfully found by the human and panda team. However, they did manage to collect enough pieces by the end of the series to be able to take advantage of their power to a degree in times of need.”