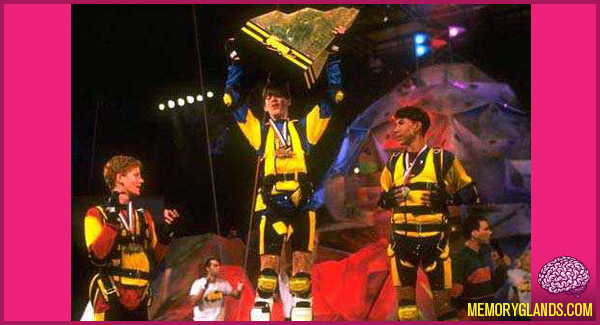 Nickelodeon GUTS is an American television reality “action sports” competition series hosted by actor/comedian Mike O’Malley and co-hosted/officiated by British actress Moira “Mo” Quirk. The series was broadcast by the cable television network Nickelodeon from 1992-1995. The show featured young athletes competing in various athletic events in the “Extreme Arena”, a set built on sound stage 21 at Universal Studios Florida. Nickelodeon GUTS reruns were shown on Nickelodeon GAS from March 1, 1999 until the network’s closure on December 31, 2007 (April 23, 2009 on Dish Network).

Its mascot was Stretch, a yellow humanoid figure with no face and a round head. He appeared in the small logos for the event categories in the first and second seasons.