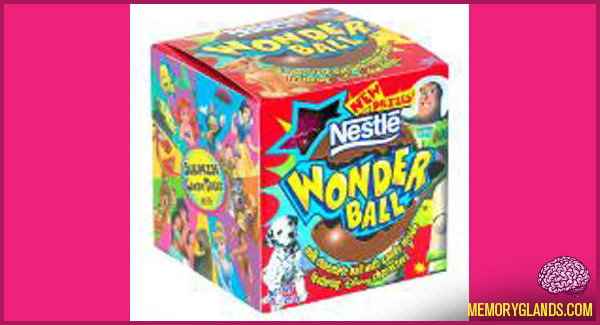 The Wonder Ball was a type of candy, sold in the United States by Nestlé and, later, the Frankford Candy & Chocolate Company.

A Wonder Ball was a spherical, thin shell of milk chocolate with candy inside, wrapped in foil, placed in a small box, and packaged with a collectible sticker. The product’s slogan was “What’s In the Wonder Ball?” Originally called Nestlé Magic Ball, the product used to contain small figurines of Disney characters, similar to the Kinder Surprise which retails in Europe and Canada. However, due to children who didn’t think to break the ball before consuming, the product was withdrawn in 1997, after some children choked on the toys.

In April 2000, the Wonder Ball was re-released with candy in place of the toys. In 2004, the brand was sold to Frankford, which later discontinued manufacturing the Wonder Ball.