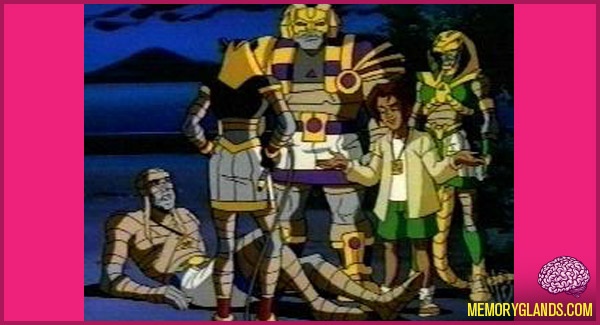 Mummies Alive! is an American animated series from DIC Entertainment. It originally aired for one season in 1997.

In ancient Egypt, an evil sorcerer named, Scarab, kills the pharaoh’s son, Prince Rapses, so he can become pharaoh immortal. Entombed alive for his crime (Rapses’ body was also never found), Scarab revives in the modern world and begins his search for Rapses’ reincarnation, a San Francisco-dwelling boy named Presley Carnavon to retrieve the spirit of Rapses’ so he can become immortal. Rapses’ (Presley’s) bodyguards, Ja-Kal, Rath, Armon, and Nefer-Tina, along with Rapses’ cat, Kahti, awake from the dead to protect him from Scarab. They use the power of Ra to transform into powerful guardians.

Each of the mummies is aligned with the power of an Egyptian god. Ja-Kal (uses the spirit of hawk or falcon), Rath (uses the spirit of snake), Armon (uses the spirit of ram), and Nefer-Tina (uses the spirit of cat). They are able to call upon it for magical armor and powers to fight superhuman evildoers; although, once their strength is exhausted they must rest in their sarcophagi to regain the ability. In order to access these powers, the mummies call out the phrase “With the Strength of Ra!”, which triggers their transformation. The mummies also have the power to make a horrifying face, usually used to scare away nosy bystanders.

In addition to Scarab, the mummies often had to contend with gods and spirits from Egyptian myth summoned to the modern world, including Anubis, Set, Geb, Apep, Bast, Sekhmet, Bes, and many others usually as part of one of Scarab’s schemes that went out of his control.